Since our last Newsletter and the very hard HS2, we had HS3 2 weeks later from Garies 365km. The weather was favorable, with no real obstacles, but Garies is normally a good test of the best pigeons..

A pack of 15 arrived 13min shy of 5hours on the wing. Included in this pack would be 2 of the 5 only pigeons back on the day of the final, as well as the now the Ace Bird that was 6th and 1st bird back on day2 of the final.

Well done to the top5 winners on HS3.

We decided to stick with the final a week later 23/24 January as much as possible, but as stated many times we studied the weather very carefully using multiple sources and even using other experts, some on route,  to give their advise and opinion on the weather on the whole final route from Springbok to Klapmuts for that weekend. By Thursday, Sunday was identified as the best day not Saturday. Saturday was just too hot from early morning. Sunday the temperatures were ideal for the majority of the route till early afternoon. Close to home the temperatures would rise to high 20 low 30 and headwinds picking up more. Our estimation based on the weather from Springbok liberation to Citrusdal/Eendekuil (120km from home) is that pigeons would be close to home by then around 12pm.

The pigeons were basketed on Saturday afternoon, and we were helped by multiple entrants from JHB, EC and CPT. We thank you for that. The overall comments were very positive wrt the state of moult and the condition/health of the pigeons. So everyone was very impressed.

The conveyor left for liberation, and we awaited the first weather reports at Springbok on Sunday morning 5am.
Early morning the pigeons were watered as per the video, and the indications were a clear cloudless sky with basically no wind and cool conditions, as the video indicated.

We waited for the sun to rise properly and liberated the pigeons at 6:40. The pigeons left well in one pack directly heading home as the video also indicated.

After about 1hr into travelling back(70/80km) the convoyer reported very low cloud and almost misty conditions in the Kamieskroon area, which continued to Garies for another 30-40km as per the video posted on the group, With a quick dash of light drizzle also just before Garies.
This was a surprise and very odd as this was never on any weather forecast..and is not expected for Summer here. The conveyer also commented that it might be a challenge for the pigeons now to get through this as this was a very mountainous area and it was basically covered..This was very concerning.

Once past Garies the conveyor stopped and I spoke to him. It was then clear skies and basically no wind as the pictures posted indicated and still cool temperatures. This was 130km from liberation.

Back at the loft we started waiting for the pigeons, and some entrants and visitors started gathering. Our estimation was between 1:30pm and 2:15pm latest for the first arrivals.

Speaking to the conveyor regularly he reported still no major winds on the N7 route down to the loft and temperatures not being that hot. Mid 20’s.

In the Clanwilliam to Citrusdal area also still no major winds before 12 and the temperatures were now mid to high 20’s…This was 200km and less to the loft.

From 1/2pm in Eendekuil/Piketberg area the winds picked up a bit and the temperatures were now 30/31 from 1/2pm onwards. This was for about the last 120km which would tie into the expected arrival of 2pm latest. So the guess was they would only encounter this for the last 2hours of flight. Up and until 12pm on route wind and heat was not that bad.

2pm came and went and as the velocity dropped more and more, I now realized something else must have happened on route, and that we are now in for a humdinger. Something we did not expect at all, and didn’t plan for based on all the predictions. I was confident that it was not the preparation/health nor training..and many others present on basketing and on final were in disbelief.

As the day came to a close the sun was setting, and some people that came to watch started leaving. I was standing outside the waiting area when a BBWF came over my head with a wild pigeon and almost flew past the loft and made a swift turnaround, swung twice in the wind and then dropped on the trap.

We waited another 1h13min for the next pigeon, 2nd and first ZA pigeon. Radford & Grobbelaar. This pigeon was 14th HS3 also. Another hen.

The 4th pigeon and 3rd ZA pigeon would have been 1st Ace bird if paid from HS1. Bekker & Stander. MIX Blood on the father’s side.

5th and last pigeon on the day Bibi Stefanescu from Romania. Proven OLR performers on both sides.

Both 4 & 5 came after sunset in the dark. Both hens also.

Irrespective of how the race turned out, I have to commend and congratulate these pigeons for being home on the day. Their will, drive, endurance and tenaciousness to get home was unbelievable.

And you will find a super story in each one of them wrt breeding and historical performance going back in the pedigrees. So its no luck.

The 5th Pigeon on HS3 was first home the next morning 43min before the next pigeon. This Holland pigeon of Wolvers-Groene is now the official Ace Bird!
It was 4th HS2 also on a hard race. This is a very special pigeon!!

Also, to note Hardy Krueger having sent 4 pigeons to HS1, only lost 1 and sent 3 to the final and having all 3 back fairly early and easy. Master breeder!

A lot of the top 5 and early next day pigeons that returned early peaked at HS3 and continued to do so in the final. Not a lot of strugglers or late pigeons which we normally see at other races if the jump is too big or if no training in between or if training is inadequate.

Which just shows me once again, that our training/distance was adequate and that the pigeons were well prepared for a final 7days later. If we waited another week, they would have struggled more, and HS3 strugglers might have come to fore more than pigeons on form in HS3.

I must admit I feel for Gilbert & Heerman as well as GJT who had the top2 Ace Birds prior to the final. It is a big loss not just for them but for the loft as well with them not returning thus far, Let’s hope they still do.

There we potentially did lose 2 super pigeons, and despite that I still want to congratulate them for their super performances and how they set the scene alight from training 1 to before the final. Something still to be proud of indeed. 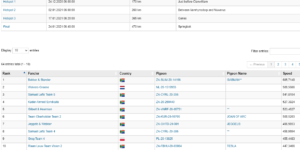 So in contrast to Wovers-Groene, Samuel Lofts and Kader Ahmed.

Final result can be seen here:

They say you are judged by your last race, and people might remember what happened on HS2 and now the final and might hold it against us. We have tried our best, and unfortunately we cannot please everyone as much as we wanted to. We have accepted it and have made peace with that and will forge forward. This is not the only or last OLR this has happened to. But let’s not make any more excuses, the only thing we can do now is improve, learn and not to make the same mistakes again. Between myself, Gert and Japie we have over 100 years experience in pigeon racing, and myself being a Race Secretary and Liberator. So we are still confident that we have what it takes to manage this OLR into the future.

Summer weather is unpredictable, hotter than normally and probably more windy in Cape Town. Even though we are experienced in racing here in Winter/Spring, we have not seen what we are dealing with in racing this route in full summer on these distances and what the worst scenario and outcome can possibly be. Totally opposite to the 2019/2020 season. We now need to adapt and be more vigilant and open for change.

We do however still feel that on the final, the pigeons hit an unexpected wall at Kamieskroon, and either got stuck behind those mountains until it cleared, or they flew around this inland to get home. This would have increased the flying distance and flying time home significantly. This explanation is backed up by a few pigeons reported inland and behind the liberation point, Pofadder(east) and Kooinaas(North).

I quote a few statements made from our last letter post final for 2019/2020 edition:

In the final 82% returned, which is also 49% of original intake.

As mentioned many times, yes we have had an easy tour with mostly higher velocities on the Hotspots and Final, but this is out of the norm it will not be case next year for sure.

Prize money was sent out prior to the final – attached again.

We will start paying out prizemoney soon, and will send out statements, so please advise banking details.

Once the auctions are complete, we will credit those proceeds separately also.

Reminder, its equal 50% each for loft and owner after costs and auction commission.(+-20%)

Please send pedigrees of all pigeons. Thanks for those that did.

The first 30 pigeons will be auctioned on Toppigeon.co.za. As we speak, photo editing is being finalized and the auction will appear online roughly at the beginning of the 2nd Week in February.

All the remaining pigeons will also be auctioned here on 2-3 separate online auctions. There will be some super pigeons for sale for sure.

Will be announced very soon!!

Bigger prizemoney and better distribution overall and for Ace Bird. Projected figures will be sent out ASAP.

Racing on the traditional inland N1 route preferably. And be flexible to change between the N7 and N1, whichever route’s weather is more favorable.

Still NO perch fees for reserves!

Still NO forced activation fees prior to HS1 or Final for reserves!
Still NO refunds for lost paid pigeons or lost paid teams at any point of the competition.

Entry fee will now be 300EUR , or 350US$ , or R5000 for each primary entry per team of 5 pigeons, payable prior or on delivery of pigeons.
Proposed Hotspots:

Ace Bird will be over these 6 races. Based on Overall Speed in Benzing (total flying distance / total flying time). Night hours will be implemented to stop clock.
3 x Club prizes on HS5 for local Clubs first 3 paid pigeons. 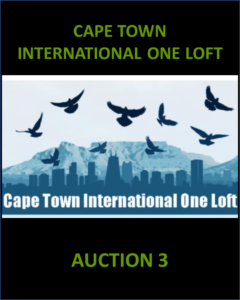